The Stargate and Wormhole To Hellish Realms

The overall thesis of this article is that Saturn is an interdimensional gateway through which reptilian aliens came to our universe/dimension. This sounds crazy but I will prove it.

The Wizard of Oz and Alice in Wonderland are good examples of the truth hidden in plain sight. They both reveal the existence of a wormhole that the aliens used to get from Universe A to Universe B (our universe/dimension.) They are also scripts used for the CIA’s Project Monarch Trauma-Based Mind Control program which is also connected to aliens.

First, Wizard of Oz. The name Dorothy Gale will be examined. DOORothy. The door is the portal, the stargate, the wormhole. D and T are interchangeable. Tor=bull. For example, the coat of arms of Turin (Torino), Italy shows a bull.

Taurus is Latin for bull. Ēl is called again and again Tôru ‘Ēl (“Bull Ēl” or “the bull god”). The bull is the Canaanite bull god El/Saturn. Saturn is an interdimensional gateway, Dorothy’s surname is Gale. A gale is a very strong wind. TORnado. torsion, torque, torus energy field, tor backwards is rot, rotation, rotary. The tornado takes Dorothy from Universe B (our universe/dimension) to Universe A. The tornado represents the wormhole. The pupil of the eye is the shape of a torus. The all seeing eye symbol so often used by the illuminati controlled entertainment industry represents the wormhole the aliens came through as I will prove in a bit. Frank Baum who wrote the Wizard of Oz was a member of the Theosophical Society so he was heavily steeped in the occult. He said that Oz is Osiris. Osiris is an ancient Egyptian sun god. Not our sun, but the black sun, the old sun Saturn. In Chaldean numerology Oz adds up to 77. The granddaddy of modern Satanism Aleister Crowley wrote Liber OZ which is Liber 77. 77 is an ode to Satan/Saturn because 11 and all its multiples are an ode to Satan. Here is the old Zellers logo.

This is Oz with with the Z inside the O. Notice the Z is split to make two sevens, one upright, the other upside down, making 77. I can’t find a picture of it but Zoomer TV on Canadian cable channels like Vision TV and Joy TV used/uses? a logo that’s exactly the same as the above Zeller’s logo. Judaism=77 in the alphabetic order, A=1 B=2 C=3….Z=26 and Zoomer TV is owned by a Jew, Moses Znaimer.

The rabbit hole in Alice in Wonderland also represents the wormhole. Alice follows the white rabbit down the rabbit hole. In Pythagorean Numerology, the most pure cipher, white rabbit=33. The devil=33 in Pythagorean Numerology. When Lucifer fell from heaven he took a third of the angels with him. 1/3=33%. They landed on Mt. Hermon, on the 33rd parallel. See my article on the number 33 for more information about the occult significance of the number 33.

Alice in Wonderland and Wizard of Oz

There is an episode of Pac Man and the Ghostly Adventures called the Wizard of Odd. This episode contains references to both Alice in Wonderland and Wizard of Oz. In this episode there is a labyrinth and the Cheshire Cat. A character which is a professor is demonstrating on a chalkboard a space worm (wormhole). In another part of the episode the professor makes the Ok hand sign and says that the space worm/wormhole is a living black hole. (1) Pac Man and the Ghostly Adventures Season 2 Episode 20 – YouTube The Ok hand sign is actually 666 in many instances when the Illuminati use it.  “If you look closely, the thumb and index finger make a circle, and the other three fingers reach up like three 6s” The Atlantean Conspiracy, Eric Dubay. A wormhole is made from two black holes. The 666 sign represents the wormhole. In many pictures of celebrities you can see them making the 666 sign and putting it over their eye. The all seeing eye also represents the stargate/wormhole as I mentioned before.

It’s the symbol of the circle with a dot in the circle called the circumpunct. It was a very important symbol to the Illuminati. In the book 2001: A Space Odyssey by Arthur C. Clarke, in the chapters called Stargate and Into The Eye, the protagonist moves in close to the moon of Saturn named Iapetus and sees what looks like a giant eye ball. He moves closer to the pupil of the eye and sees that it looks like the black monolith from the beginning of the book. He moves in closer to the monolith and it inverts into a shaft and he goes into the shaft and there are stars that look like streams of light as he is moving through the wormhole. There is also a chapter called Alien Sky which implies aliens. The movie 2001: A Space Odyssey was released in 1968 the same year as construction began on the Twin Towers. The Twin Towers came crashing down 33 years later. 33 is a very important number. See my article on it here https://wordpress.com/post/theserpentofwisdom.wordpress.com/85/. Stanley Kubrick was sacrificed 666 days before 2001 his space odyssey. Revelation 9:11 says ” they had a king over them, which is the angel of the bottomless pit, whose name in the Hebrew tongue is Abaddon, but in the Greek tongue hath his name Apollyon.” Abbaddon and Apollyon (Apollyon is derived from Apollo, the sun god in Greek mythology) are names for Satan. The bottomless pit is the wormhole. In the smoke of 9/11 was a mirror image of the face of the sculptured head of Abaddon in Steiner’s Goetheneum.

There is a children’s cartoon called Gravity Falls. It has Jewish producers which is noteworthy because the Jews dominate the world. also their belief system is called Kabbalah which teaches them to dominate the world. Also that if they tell us their plans, even if we don’t understand them, their karma is lifted. This is why in the Jewminati (a portmanteau of Jewish Illuminati) controlled entertainment industry their were tons of Easter eggs called predictive programming that predicted that 9/11 was going to happen. It desensitized people for when it actually happened. There is an episode where the protagonist and his friends find a hole with a sign by it that says bottomless pit. 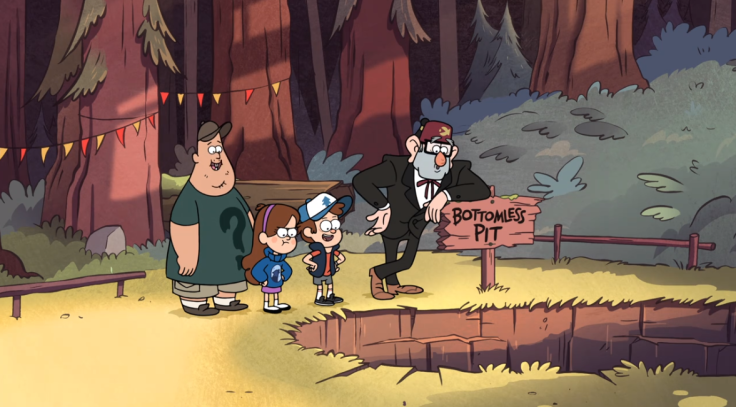 the following link shows the scene. https://www.youtube.com/watch?v=Fco-M4L5FEY&list=PLS1Veq7-HDKciDh5u5NEIhbuIybjPnv3s&index=8. They jump into the pit and when they come out the other side they see that its exactly the same place they were in before. The protagonist Dipper (as in the Little Dipper which has the pole star. Dipper represents the pole star which represents Jesus, but that’s for another article) says “this must be some kind of wormhole”.

As stated earlier, Apollo is the Sun god and from it is derived Apollyon in Rev. 9:11. The sun is itself a stargate and wormhole. Sion is the sun and Sion is the stargate. The ancient Egyptians believed the way to heaven was through the sun. Jesus is a sun god. Jesus said the only way to the father was through him. ” Jesus answered, “I am the way and the truth and the life. No one comes to the Father except through me.”  The ancient Egyptians viewed our sun as a tunnel. Interestingly the word for hell in Finnish is “tuonela” which means “tunnel’. The mythological hell with its fire and flames is symbolic of the subnuclear world of antimatter, the black hole in space. See Kenneth Grant in Nightside of Eden. The song Black Hole Sun by Soundgarden comes to mind, The black hole sun is Saturn. The Egyptian “Book of the Dead” has a picture of the sun with the hieroglyph for heaven above it. How you would interpret it then is that the way to heaven is through the sun.

In the movie Stargate the character played by Kurt Russel is the first one to go through the stargate and the first thing he sees are the pyramids of Giza. In the movie Escape From New York the character played by Kurt Russel flies a plane on to the top of one of the twin towers. This is called synchromysticism. See the Brave New World Order blog by Jacob Kotze for more information about the 9/11 stargate.